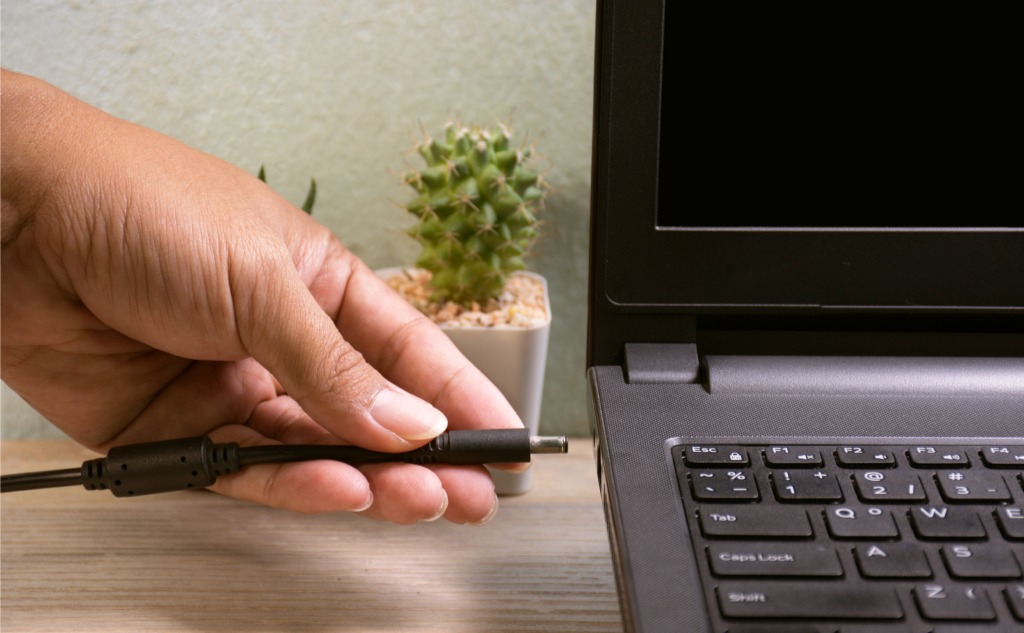 Here’s why your laptop charger blinks when plugged in:

The typical laptop charger features one or two small but visible indicators that use LED lights to “communicate” their meaning.

A solid light indicates that the charger is powered and working.

When an indicator displays a blinking light signal, that’s a sign that the charger has a problem and shouldn’t be used.

So if you want to know all about what it means when your laptop charger blinks, then you’re in the right place.

What Does It Mean When Your Laptop Charger Blinks?

When people normally charge a laptop and its battery, the first indicator of the need to get connected is a warning on the laptop screen that the battery is about to die out.

So, like anyone with an electronic, portable gadget, we plug it into a wall socket. How do we know it’s working?

The device has a little indicator that lights up to signal it is charging and, sometimes, the charger itself also has a light. For laptop chargers, this is a common feature.

The light comes up, the laptop starts charging, and eventually the battery is fully restored and able to run the laptop without a power source for another cycle.

However, what happens when the charger light itself is blinking? It’s a lesser-known indicator that something is wrong.

Look For the LED Indicators

The typical laptop charger features one or two small but visible indicators that use LED lights to “communicate” their meaning.

A solid light indicates that the charger is powered and working, transmitting energy to the laptop. Usually, this indicator is green.

However, when an indicator is giving off a blinking green light signal instead, this is a very different message to pay attention to.   It’s a signal the charger itself has a problem and should not be used, i.e., it’s defective.

Rather than continuing to use a bad charger which, over time, could create the risk of an electrical fire or short, the charger should be replaced entirely.

A second charger should be secured, matched to the laptop for the correct power delivery and fit, and the old unit should either be repaired or discarded altogether.

In some less-common cases, the culprit may actually be the connection socket and motherboard wiring in the laptop itself. This can happen if the jack, when plugged in, has been bumped hard or bent.

However, with modern laptops, this particular area has been reinforced for just this reason, and the cause is rarer than it was in previous years when laptops were newer and more of a novelty.

Repairs Are Not Usually Possible

Can chargers be fixed by the typical consumer? In a word, no.

Generally, laptop chargers are sealed units. They are designed to be hardy, repeatedly used, and long-lasting.

In most cases, the laptop itself becomes obsolete and is replaced long before the charger begins to fail. However, nothing is perfect, and chargers can and do fail. They are typically not repairable with simple fixes because the assembly itself is sealed.

To actually get to the wiring and replace anything, one would have to open up the charger, fix the issue, and then figure out a way to permanently seal it again. Most folks don’t have the equipment necessary to do the job.

It is possible to take the unit to an electrician to do the job, but given the cost of the work, it would likely be a lot cheaper to simply order and buy a replacement charger. They are plenty and easily available online through most e-commerce suppliers, like Amazon, Walmart, and other big stores.

In some cases, one might even be able to find a used replacement from a recycling store, getting a working unit that someone else no longer needs and is being resold.

Buy Aftermarket or OEM, Which is Better?

The common debate many folks have about a replacement then tends to be whether the unit bought should be a factory stock model or an aftermarket replacement.

Most folks who have used electronic devices for a while are familiar with aftermarket charges actually ruining devices, charging them wrong, and causing circuitry to burn out.

Everything from cell phones to tablets and laptops have been victims. So, it’s normal for anyone with a bit of awareness to be wary of aftermarket chargers.

Ideally, OEM parts, those made by the factory itself, are the best way to go, but it’s often the most expensive as well. Aftermarket chargers can and are great deals that work fine and are reliable if a respectable manufacturer provides them.

In today’s e-commerce world, it’s a lot easier to confirm than it used to be in a physical store. Laptop owners needing a replacement should focus on any kind of feedback and consumer ratings first.

If a charger is needed, there’s a very good chance someone else has needed it sooner, and they’ve left commentary about whether a given vendor’s products are reliable or not. Paying attention to these remarks, good and bad, can save one’s equipment from a nightmare as well as pin down which products are consistently reliable.

Don’t Shortchange Your Computer Being Stingy

In some cases, folks are still getting a charge from a defective, blinking charger and don’t see a need to stop using it. This is an entirely preventable and very bad mistake.

So why do folks still take the risk? A lot of this human behavior has to do with how we focus on cost. A charger cost is small enough to be focused on immediately. Why pay $40 or $60 when it can be avoided?

The choice seems like immediate, tangible savings. However, the real loss can be the laptop itself, anywhere from $300 to $2,000. But that’s a bigger figure which isn’t real until the device is burned out.

So, folks focus on the immediate cost presented, that being replacement of the charger. And if it still works, then why not save a few dollars a bit longer? So, the logic goes.

In fact, using a defective charger, even if it still charges, runs the risk of the unit passing along too much energy and burning out the connectors on the jack or motherboard itself. When that occurs, it could mean the end of the laptop.

In serious cases, even the hard drive could be damaged, or a fire could occur. Also, more often than not, the bad charger destroys the laptop battery, making it impossible to charge again at all. That alone can be a headache to replace as well.