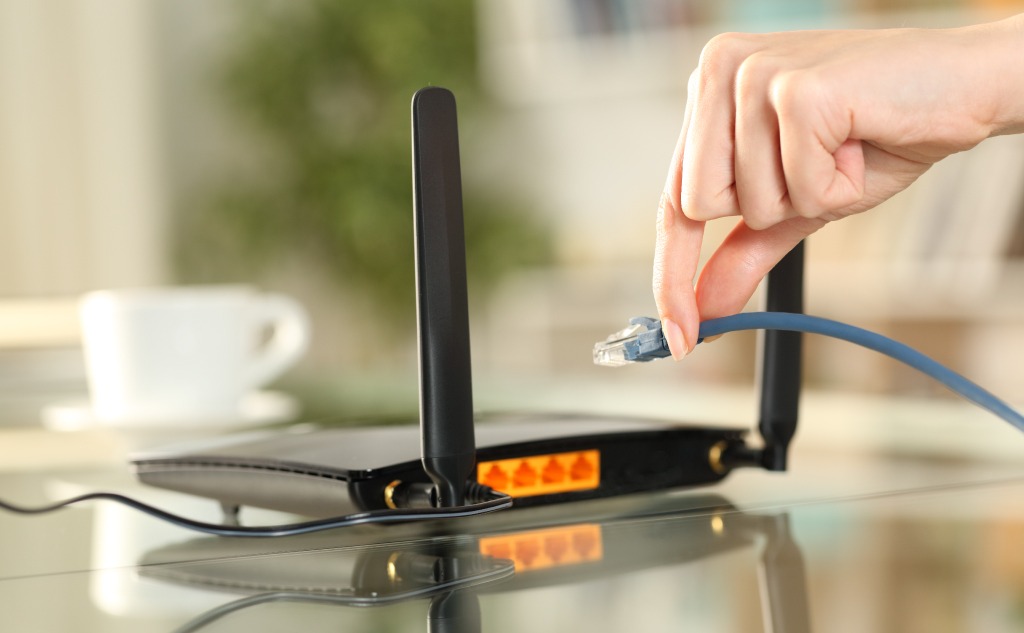 Your Ethernet cable won’t change the speed defined by your internet plan. Your speeds are dictated by your plan, not your cable.

There won’t be any speed benefit with a different Ethernet cable unless yours is broken.

Your Ethernet connection will usually be faster and much more stable than Wi-Fi, though.

So if you want to learn all about in how far Ethernet cables affect your internet speed and what to do about it, then this article is for you.

What About Ethernet Cables and Internet Speed?

We’ve made tremendous strides in internet technology in the past decade. So much so that a typical household now has Wi-Fi with speeds that were once considered almost enterprise-level.

But, how fast is fast enough?

When we know that there are fiber internet connections with speeds that go up to 10 Gbps, we’re left always asking ourselves how we can get the most out of our broadband speeds.

You’ll often hear one solution mentioned: switching to an Ethernet cable instead of Wi-Fi.

So, how significantly can an Ethernet cable affect your internet speed?

Read on to learn more about this type of connection and its benefits.

First, How Does the Internet Work?

The internet is an extensive network of networks that communicate through a complex infrastructure of cables, routers, and Internet Service Providers.

First, the internet is decentralized—it doesn’t have a governing body or a single place where all information is stored. It isn’t this one thing that you can locate. It’s a system of networks that all work together.

So, asking something like “where is the internet?” would make no sense because you are the internet—you and everyone else who has a connection.

Second, while the internet may seem like this abstract, digital thing, it’s actually surprisingly analog.

You wouldn’t be too far off if you claimed that the internet is all computers, data centers, and routers connected (physically) with wires that traverse the whole world.

The point here is that your Ethernet cable (or Wi-Fi router) is the last point in a complex chain of factors that dictate your internet connection speed.

So, curb your expectations when it comes to increasing your internet speed by switching to a cable.

Chances are, you’ll get much better results by changing your ISP (Internet Service Provider) or upgrading to a better, more expensive plan.

Ethernet cables look much like your standard telephone cable, only thicker and with larger connectors.

Ethernet cables’ most common structure is called the “twisted pair,” which feature—you guessed it—pairs of wires that are twisted together. This is the industry standard for cable internet, and it’s outperformed only by optic fiber connections.

That’s because these cables use separate wires to transmit and receive data, reducing electrical noise that can sometimes interfere with the data being transferred.

Depending on which types of devices they connect, Ethernet cables can be:

Ethernet cables also come in different categories when it comes to the speed with which they carry data.

There are also Cat8 cables, but these are created specifically for data centers, so they’re much more expensive and not practical for household use.

Keep in mind one thing, though: your Ethernet cable won’t change the speed defined by your internet plan.

In other words, switching from a Cat6 cable to a Cat7 cable won’t help increase your speed if you’re paying for a 2 Gbps connection. Your speeds are dictated by your plan, not your cable.

Are Ethernet Cables Faster Than Wi-Fi?

That being said, your Ethernet connection will usually be faster and much more stable than Wi-Fi. Still, the gap could not be as significant as you might think.

Wireless standards like the 802.11ac developed in 2013 can achieve speeds that can go up to almost 7 Gbps which is incredible for all types of connections.

In general, Wi-Fi internet can be high-speed if you’re using the proper wireless standard and you’re paying for a top-of-the-line plan.

The thing with Wi-Fi is, these speeds are theoretical.

A wireless connection (even as powerful as 802.11ac) will rarely achieve its maximum speed in practice.

Your wireless connection will be shared by all your devices in practice, so having your PC, several smartphones, and a TV all share the same Wi-FI will undoubtedly affect your speeds.

This means that running a line from your router to your device will likely result in a more stable connection. Unlike Wi-Fi, Ethernet cables can almost guarantee you a consistent speed.

But, your internet experience isn’t only about speed. It can also be about latency, especially if you’re a gamer. Ethernet cables perform better in this aspect as well.

Another thing you shouldn’t ignore is the fact that cable connections are more secure than Wi-Fi. Since it’s a piece of hardware that goes directly to the router, it can’t be hacked like your Wi-Fi password.

Overall, while the gap between Ethernet and Wi-Fi has been reduced, cable connections are still faster, safer, and more stable.

Different Wi-Fi Standards: Which One Is the Fastest?

How about Wi-Fi? What speeds can you achieve with this connection, and what are all the standards to choose from?

How to Set up Your Ethernet Cable?

If you want to switch to a cable and get a more stable connection, it’s pretty easy to do.

Once you have an Ethernet cable, all you need to do is connect it to your PC and your router—no need to install any software or check any settings.

Find the appropriate port on your router (usually marked as “Ethernet” or “Network”) and plug in the cable.

If your laptop doesn’t have an Ethernet port, you can get an Ethernet-to-USB adapter.

Once you plug the cable into both devices, the little Wi-Fi icon on your PC will change to an Ethernet icon, showing you that your PC is connected.

A lamp on your router will also likely start to shine, and you’ll get a faster, more stable connection just like that!

On another note, do Ethernet connections affect your Wi-Fi speed?

Ethernet connections do not reduce the speed of other devices.

Wi-Fi connections with a high number of devices will result in slower speeds.

Due to the constant speed of Ethernet connections, you may believe other devices are losing speed to them.

Learn all about whether an Ethernet connection affects Wi-Fi speed here.