Here’s why your pictures look different on your phone than on your computer:

Phones and computers use different hardware to understand and display images.

On top of that, there are countless software differences between the two devices that can produce many image discrepancies.

So if you want to learn all about why your pictures look different on your phone than on your computer, then this article is for you. 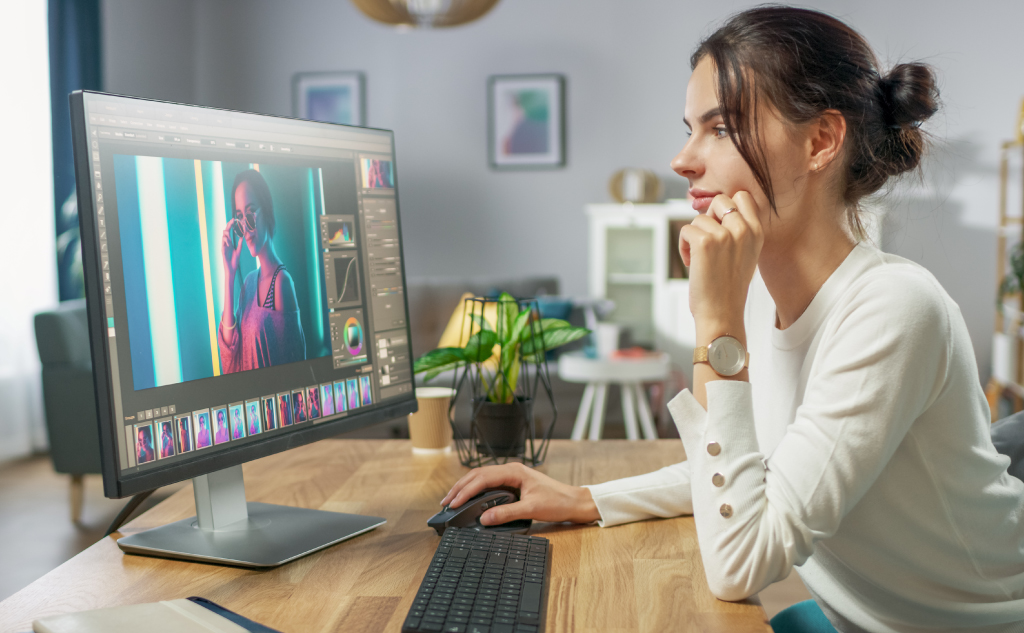 What Is the Difference Between the Way a Picture Looks on a Phone and a Computer? (7 Causes)

The photos definitely look different, sometimes more so than others. What is causing the change?

It boils down to a lot of differences in the software and hardware being used by each device.

Settings on each device matter, too, so it’s probably easier to tackle this one concept at a time.

RGB color is a term that describes the colors a monitor or screen can produce.

Every screen is going to have a slightly different range of RGB colors that it can produce.

So, when you take an image from one device to another, the colors will literally be different between the two devices.

In most cases, any given device has enough of an RGP range that these differences will be subtle.

But, since every device literally produces color in a slightly different way, you might notice that the colors just aren’t the same when you go from a picture on the phone to the computer.

In fact, the RGB variance on a device will change over time.

The same photo might look different next year, even if you’re using the same phone or computer. That’s how variable this is, and it’s why you can never guarantee that a picture will look the same when you change devices.

Another important factor is pixel counts. Every screen has its own specific resolution. That resolution is formed by the individual pixels that the screen uses to make images.

We’ll go over screen shapes and ratios in a bit, but first, we can talk about pixels themselves.

Essentially, having more pixels allows an image to appear softer and more detailed.

If you’re familiar with the idea of mosaics, it’s really the same idea.

If you’re making a picture out of squares, you can get a better image if you use smaller squares or if you get farther away from the mosaic.

That’s basically how pixels work too. For the same image on two devices, the device with more pixels is going to be able to show better detail.

So, lines can blur, and the shapes in the image can distort a little if you go from a device with a higher pixel count to a lower pixel count.

Bit depth is a different concept. This is a digital representation of the picture.

Ultimately, these pictures are stored and processed as a series of 1s and 0s for the computer. That’s what it means to be a digital picture.

Bit depth refers to how much information is used to describe the picture.

More specifically, bit depth tells you how many bits of information are tied to the color of a single pixel. That means that higher bit depths lead to greater color variety and accuracy.

So, if your devices use different bit depths, the colors will look weird when you go from one device to the other.

This goes back to pixel count.

Ultimately, the pixels in a display are counted in rows and columns.

One of the most common screen resolutions for a computer is 1920 x 1080 pixels. That’s a huge number of pixels, and this allows for a 1080p display. In other words, it’s high definition (but not the highest definition).

Now, some phones are made with this aspect ratio, but others aren’t. One of the common aspect ratios on a phone is 18:9. This is subtly different from 16:9, but when you compare a picture on these two aspect ratios, you’ll notice a little bit of distortion.

If the photo is filling the entire screen, it will have to stretch a little to go from 16:9 to 18:9.

If you’re going the other way, it has to compress a little.

This can make the photo look a little funny when you go from one ratio to the other, and it’s one of the major causes of the differences you are seeing.

This ties closely to aspect ratios.

If you have ever cropped a photo, you have an idea of what is happening here. Or, if you ever watched a widescreen movie on an old square-shaped television, it’s the same idea.

The software can cut or crop the photo. It can also squash or elongate the photo.

Ultimately, the software on the device can change the aspect ratio of the image to be different from that of the screen. When it does, the photo will not perfectly fill the screen, which is pretty normal.

But, this also means that the visual dimensions of the photograph are being distorted again. This is entirely dependent on software, so it’s one more way that things can look strange, even when you didn’t manually alter the photo.

This gets back to physical differences in screens, but there is a software component too. Screens are ultimately lit by LED lights, and not all LEDs are equal.

The two screens you use will likely produce different levels of brightness. That brightness can change how a photo looks.

The brightness capability of the screen is only part of the issue. Pretty much all modern devices allow users to adjust brightness settings.

If the brightness settings on the two devices don’t match, you’ll see major discrepancies in the photo appearance.

Even if you make the effort to try to perfectly match the brightness on both devices, it will never perfectly align. That is because the screens are designed differently, so the physical way they produce light is not quite the same.

Contrast is the last major issue in this group. Every screen has a contrast setting that is adjustable.

When you adjust the contrast, it changes how different colors in the image represent shade or darkness. It’s kind of the opposite of brightness.

That means that this is something that is inherently different from screen to screen.

It also means that if the settings aren’t matched across your devices, you will see larger differences.

Once again, the contrast on two different devices will never perfectly match.

How to Take Polaroid Pictures of Phone or Computer Screen?

On another note, have you ever tried taking a Polaroid picture of your phone or computer screen?

Not the easiest thing to do.

Controlling the lighting is the key to a good Polaroid of a phone or computer screen.

In order to get better image quality, you should consider a slower shutter speed and soft lighting.

Alternatively, you can print a Polaroid from a digital image using a Polaroid printer or third-party service.

Learn all about how to take the perfect polaroid picture of your phone or computer screen here.

What Causes Images to Change From One Device to Another Like From Phone to Laptop? (2 Reasons)

Everything discussed above explains the differences in how the devices display images.

But, the image can literally change from one device to another.

So, even if you were using two identical phone models, you might still see discrepancies. That is tied to things that digitally change an image.

This is especially present with smartphones, and doubly so for iPhones. Modern phones have a lot of software that adjusts how they take a picture.

Instead of simply capturing an image, the software adjusts all of the settings mentioned above to try and optimize the photograph.

This can change the shape of an image, colors, brightness, contrast, and every other facet of the photo.

Those automated adjustments are optimized for viewing on the phone that takes the picture. They are not optimized for other devices.

So, if you take a photo on your phone and then look at it on your computer, the lack of software optimization is often going to make the computer display look a lot worse.

It’s ultimately a matter of image shape, color, bit depth, pixel counts and all the rest, but the automation at play makes it incredibly difficult to try to manually adjust settings on the two devices to minimize these differences.

There’s an entirely digital issue that can also arise. In order to look at the same photo on two different devices, you have to transfer a file. Maybe you downloaded the file to both devices.

Maybe you shared via the cloud.

No matter how you went about it, the transfer of information can change what a photo looks like.

This has to do with file size changes. The original digital photograph is defined digitally by a string of code.

When you share that code from one device to another, it is often compressed. This reduces the amount of information in the file so that it transfers a lot faster.

When the file gets to its destination, it is unzipped. That means that the other device tries to rebuild the original file, but there is guesswork involved.

In many cases, the file on the new device will be a slightly different size than the original, proving that changes were made.

If the file size changes at any point during the data transfer, the image is literally changed as a result. These differences can be too subtle for the eye to discern, but they can also be dramatic and obvious.

The very last topic for why photos look different is sRGB. This is conceptually the same idea as RGB, but it’s a proprietary RGB definition system that is used almost exclusively by Windows.

﻿Unless you have a Windows phone (or a Mac and iPhone), your phone and computer are not using the same definitions to describe color.

The RGB standard on your phone cannot perfectly match the sRGB definition on the computer. It’s impossible, and the colors will inevitably look at least a little different across the two devices.

Do You Feel Like Your Face Looks Pretty in a Mirror but Ugly and Asymmetrical in Flipped Phone Pictures?

Have you wondered why your face appears different in mirrors compared to your flipped phone camera?

Since most people see themselves in a mirror every day, you perceive this as the original image.

So when you see yourself in a phone picture, your face appears the wrong way, but that’s how you’re used to seeing it.

Therefore, your brain is the one telling you that the image is ugly. It is psychological in nature.

Learn all about why your face looks pretty in the mirror but appears to be ugly and asymmetrical in flipped phone pictures here.