Here’s whether you can use a SIM card’s data service if you put the SIM card from your cell phone into your tablet:

The short answer is maybe.

SIM technology is virtually the same whether it is designed for a phone or a tablet, but a lot of carrier-induced restrictions do exist.

If your SIM card meets four different criteria, then it can work fine in your phone or tablet, and you can swap the card between devices as you see fit.

If you want to learn all about whether you can use your SIM card’s data service, if you put the SIM card from your cell phone into your table, then you’re in the right place. 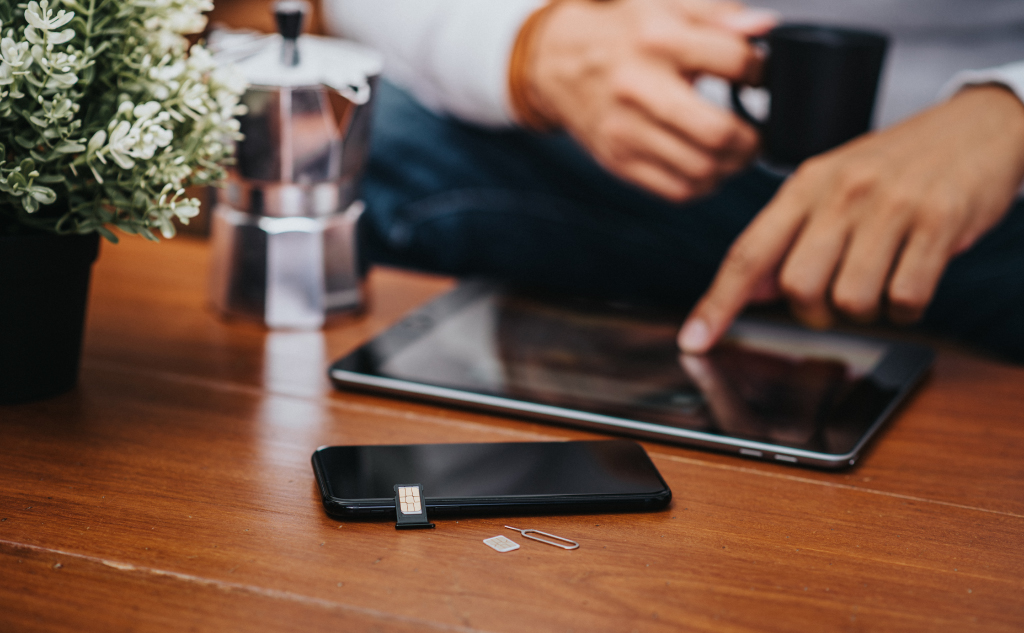 How Do SIM Cards Work?

Most people know that they need a SIM card to use a phone or tablet, but what does it really do?

Basically, it’s a device that identifies your account and device when it connects to a carrier network.

This identification is necessary to place calls, send SMS, and access data over the carrier network.

The network has to identify who the device belongs to and where they are located in order to properly route any traffic, data, or cellular to the phone.

The same is true for tablets, although they often don’t have phone call and SMS services. If you want your tablet to connect to a carrier network, it needs a working SIM card. Without the card, you have a Wi-Fi-only device.

It’s important to understand that the SIM card is not the antenna. It’s not the hardware that physically communicates with the network. It only acts as an identifier, so the network knows where to send information.

When Can You Swap SIM Cards Between a Phone and Tablet to Use Data Services?

Knowing how important the SIM card is for your device, you definitely want one to get the most out of your tablet. You know that this works some of the time, so what’s the real limitation?

There are a few barriers you will need to consider. The SIM card has to be of the right format to communicate with your carrier.

It has to operate on the correct file systems and be compatible with the larger carrier network. It also has to obey rules set by the carrier, and it has to be the right size.

We’ll get into each of these issues in detail. The important thing to remember as you read is that any one of these issues can prevent the SIM card from working in the tablet, even if it works fine in your phone.

Carriers get to make their own rules for how they grant access to their infrastructure. A common rule among the major carriers is to offer and require different data plans for phones and tablets. The theory is that tablet usage is more data-intensive than phone usage, and the minimum data purchase on tablets is usually higher.

Keep in mind that these plans still function on the same communication methods. As far as the technology is concerned, there is no difference.

But, when carriers set these rules, they can create automated systems within their service that can prevent your tablet from successfully using a phone SIM card. This is one of the largest hurdles you will face if you try to swap a card from a phone to a tablet.

The thing about networking reporting and data configuration is that they are not universal. If either fails to match, the tablet will not be able to use the SIM card.

There is some good news. This is largely an older problem when locking devices for carriers was more common. For most LTE devices, it’s easier to design them for unlocked service, and both network reporting and data configuration are much more universal. If you are swapping SIM cards, this is unlikely to be a problem, but it does still happen on occasion and is worth remembering.

This is the big one. Each carrier configures SIM cards in its own way. You cannot mix and match as you see fit. The card has to be compatible with the carrier network. Mostly, this boils down to GSM vs. CDMA.

To spare you a long, complicated explanation, suffice it to say that these are two different carrier protocols. GSM is used by Verizon and Sprint. Meanwhile, CDMA is championed by AT&T, and it has been adopted by the majority of carriers around the world.

GSM and CDMA are completely different systems that manage communications across the entire carrier network. So, the long story short is that the cards are not cross-compatible. If you have a Verizon card, it won’t work on an AT&T account and vice-versa.

That’s not the end of the story, though. As previously mentioned, a lot of devices are built for unlocked access these days. Because of that, universal SIM cards are a thing, and they are becoming quite popular.

If you have an unlocked phone, it probably uses a universal SIM card. In that case, it works on GSM and CDMA networks.

Even if you get your card from a major carrier, there’s a fair chance that it won’t be locked. You can always ask if a card is universal, or you can simply try it on your tablet to see if it works. As long as the card physically fits in the slot, you won’t damage anything by trying it out.

Speaking of fitting, card size is your final barrier. It’s less of a problem today than in the past, but it helps to know what’s going on here.

Every several years, SIM cards get an update, and the size and format of the cards changes. These are usually born of performance upgrades, and it’s good to have the newest cards. Legacy cards, for instance, can’t upgrade to 5G service.

When SIM cards get a major overhaul, they tend to shrink in size. Original, or standard, SIM cards were much larger than what came after. The second iteration was called micro SIM, and those cards are noticeably smaller than standard SIM cards. Today, most devices use nano SIM cards. They are yet smaller, and that’s important to remember.

If your devices are both five years old or less, then they are almost guaranteed to use nano SIM cards. Even if one of them is older, you can get conversion trays that allow nano SIM cards to power legacy devices.

Small cards can go into larger slots (with an adapter). The only true limitation is in the other direction. Larger cards never fit in smaller slots, so you’ll need a new card for your tablet if you run into this issue.