Here’s what it means when anime girls cross their eyes and stick out their tongue:

An anime crossing her eyes and sticking her tongue out could mean a number of different things.

In many anime and manga, it’s a common trope used to portray mockery of another character.

In another circumstance, the face might reference ahegao, which is very sexual in nature.

So if you want to learn all about what crossed-eyed anime girls with their tongues out mean, then this article is for you. 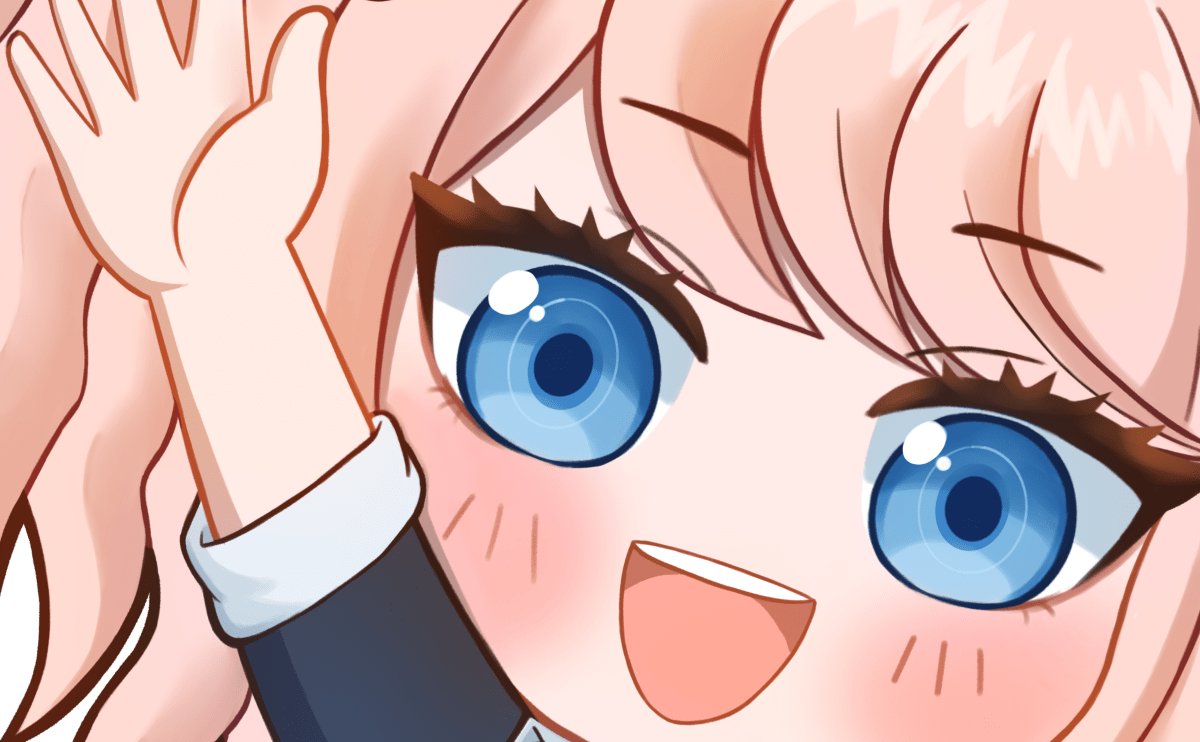 What Is This Eyes Crossed, Tongue-Out Anime Girls All About? (3 Types)

Ok. If you’re reading an article about anime girls or egirls crossing their eyes, then I have to assume you aren’t inundated in this subculture.

A lot of this is new to you, and that’s fine.

It’s also possible that you actually know all of the answers and you’re here for fun.

If the latter description applies to you, feel free to skip ahead.

I need to have a serious talk with the newcomers for a minute.

Back to the point.

This is a culture that is peripheral to your knowledge at best.

That means I’m going to have to explain some awkward things.

There’s no way around it.

On the surface, the tongue-out thing is a trope in anime.

There are actually a few tropes that I’m going to explain, but when real people do it, one way or another, they’re referencing the tropes.

When we get into the nuts and bolts of all of this, you’ll see why I’m being vague at the moment.

What you really need to know to start this discussion is that anime is pretty mainstream these days, especially with people under 40 (yes, millennials are that old now).

Since that age group coincides with the majority of active users on TikTok, anime references are effectively mainstream pop culture references.

Seeing the tongue-out face is akin to asking “who’s on first” to anyone over the age of 40.

Let’s talk about what these faces mean and where they come from.

I’ll start with the anime and manga references.

You know what, just look at the picture. It’s easier.

For those who haven’t spent time in the world of anime (or East Asia), this is not something you’re used to seeing.

The good news is that it isn’t anything weird or creepy.

It’s about the same as a 4th-grader sticking out their tongue at someone.

The idea is to make a mocking face, and if you look at anime at all, you’ll see this face a lot (especially if you watch any anime from the 90s).

There’s not really a lot to talk about.

The face isn’t intended to be vulgar—just mildly disrespectful or mocking.

There’s an escalated version of the face above where both eyes are open and crossed, but the tongue is still out.

This is still a mocking face, but it’s a lot less common.

The primary reason to point this out is so you can easily distinguish it from the next section.

Once more, this is just a common way to make a taunting face at someone.

We don’t really need to go any deeper.

At last, we’ve come to what is most likely the answer to your question.

Ahegao is a name for a visual trope in anime and manga, and before I explain it, a warning is necessary.

Ahegao is frequently referenced in mature and sexual content, and it carries strong sexual undertones.

If you’re not comfortable with such a topic, then this is a good place for you to stop.

You can walk away knowing that ahegao is sexual in nature, and that’s good enough.

If you’re ok with this conversation, then I’m about to spell it out pretty bluntly—using the most polite language I can manage.

Ahegao is a trope used in anime to visually express an orgasm without resorting to nudity or otherwise explicit animations.

The photo above is a wholesome version of this visual trope.

The ahegao face usually depicts a female in a sexual situation.

Her eyes are typically rolled back in her head, although sometimes the face will have a cross-eyed expression.

The tongue is usually out and drawn in a way that makes the face look distorted and out of control.

The concept behind the drawing is that the character is so engrossed in sexual pleasure that she has lost all sense of self and control.

The ahegao face is supposed to denote overwhelming ecstasy, something beyond a run-of-the-mill sexual experience.

I’m not going to embed any other photo than the one above, just in case people don’t want to see this, so here’s a link instead.

More often than not, content that features an ahegao face will also have a mature-content label.

This isn’t because the ahegao face itself is censored.

It’s because this type of drawing is more commonly used with explicitly sexual anime and manga.

There it is. Now you know.

But, if you want to understand the real-life versions, there’s still more to discuss.

Why Do People Do Crossed-Eyes and Tongue-Out in Real Life? (3 Reasons)

Chances are, you came here because you’ve seen a lot of pictures and/or videos of real people making weird faces and you don’t know why.

You now understand the source material for all of this, but the real-life applications are a little different.

I’m going to discuss all versions of the tongue-out face, but the motivations are largely the same regardless of what kind of face the person is making.

In a lot of cases, people on TikTok (or wherever) make these faces specifically to reference anime.

It’s kind of like making an obscure movie reference with the way you phrase something.

It’s a bit of a sly nod that other fans will notice and reciprocate.

But, since these tropes are so widespread and anime is so global these days, it’s not the slyest of nods.

It’s mostly kids and young adults participating in a fad where dressing and acting like anime characters is a popular thing to do.

If you have ever seen a Naruto runner, the tongue-out face is a similar kind of thing.

It’s people being silly for the sake of it and nothing more.

If only the conversation could end above.

Sometimes, you’ll see real people going as hard as they can making the most genuine ahegao face possible.

So, now I have to talk about it.

If you looked at the drawn references in the link in the previous section, then you know that ahegao is extremely exaggerated.

It’s not a face that a real person would make.

When real people make such a face, it’s usually a lot tamer.

You might see girls on the internet rolling their eyes back and sticking their tongues out, and that’s about it.

In this case, it’s an ahegao reference, but it’s more about symbolism than anything else.

Consider the extended middle finger as a comparison.

When someone flips the bird, society usually takes it offensively, but an objective analysis of the hand gesture doesn’t provide anything crude or disturbing.

It’s just a protruded finger from a hand.

The offense comes from the symbolism behind the gesture.

Ahegao is similar in that idea.

It’s not necessarily that something sexual is actually happening.

Unfortunately, there’s an exception to this.

If you dig hard enough (and that’s not a recommendation), you’ll find examples of some very real ahegao faces.

These are people drooling on themselves and really getting after it.

When the face is so extreme, it’s less about the symbolism (although that still matters).

Was that awkward enough?

I warned you earlier, so at this point, it’s really on you that you kept reading.

Here’s some good news. We don’t have to talk about ahegao anymore.

There’s one more reason that you’ll see people on the internet crossing their eyes and sticking their tongues out. They’re making a mocking face.

They’re pulling straight from the anime trope. The face is intended to convey mockery, and that’s really it. You could equate it to giving someone a thumbs-down.

What Are Some Prominent Real-Life Examples of Crossed-Eyes and Tongue-Out? (3 Women)

That was a fun journey, but some of you aren’t fully satisfied yet.

I gave you examples of these faces in actual anime, but I didn’t link any pictures of real people doing it.

If you want some genuine, real-world examples of these faces, then there’s a little more to discuss.

Below, I’ll cover the most prominent examples of these faces that I could find.

Hopefully, after that, you will be satisfied, and we can talk about something else next time.

Easily, the most prolific example of online figures making various versions of these faces is Bell Delphine.

This is a person who was in a lot more discussions a few years ago as compared to today, but she’s still too good of an example to ignore.

Belle Delphine has accounts on all of the major social media platforms, but before you start Googling, here’s your fair warning.

A lot of her content is not safe for work (NSFW), as the saying goes.

There’s also an OnlyFans page (no, I’m not linking it), just to give you an idea of what you’re in for.

Belle Delphine is quite the character.

Among many other things, she gained a lot of notoriety for marketing her bath water and selling it online.

We’re really talking about a different kind of subculture here.

But, among her content, you’ll find images where she is simply referencing anime, making a taunting face, and getting into the… less-savory topics we’ve discussed so far today.

If you want to see a far less sexualized real-world example, you can look to Pokimane.

One of the most popular streamers in the history of Twitch, she has a massive following and is a major influencer when it comes to the modern world of the internet.

I’ll skip the long biography, but Pokimane is another online personality with a lot of social media accounts.

You can actually browse Instagram account without seeing anything too outrageous, and among the photos, you’ll see examples of tongue-out face.

These typically are not lewd in context, and you’ll see the different aspects of the face.

Regardless, if you want something a lot tamer than Belle Delphine, Pokimane’s accounts might be a better starting point.

We can round out real-life examples by discussing Jessica Nigri.

Before I get into it, you get one more content warning.

So, browse at your own risk.

Nigri is arguably the most famous cosplayer in the world.

If you’re not familiar with the term, she has effectively made an entire career of dressing up like famous characters.

Those characters range from extremely well-known pop icons, like Darth Vader, to obscure anime and video characters that I couldn’t hope to name.

Considering the nature of this work, Nigri does a lot of video and photo work, and you can find countless images of her around the internet.

Among those countless images, you’ll run into anime faces, including the ones we have discussed here today.

Like those above, Nigri uses these faces to convey different messages.

Sometimes, it’s part of the authenticity of the anime character she is portraying.

Other times, she’s trying to make a sexual reference.

You’ll find everything in between.

To keep a long story short, she’s one of the most prolific examples I could find, so that’s why her name is here.