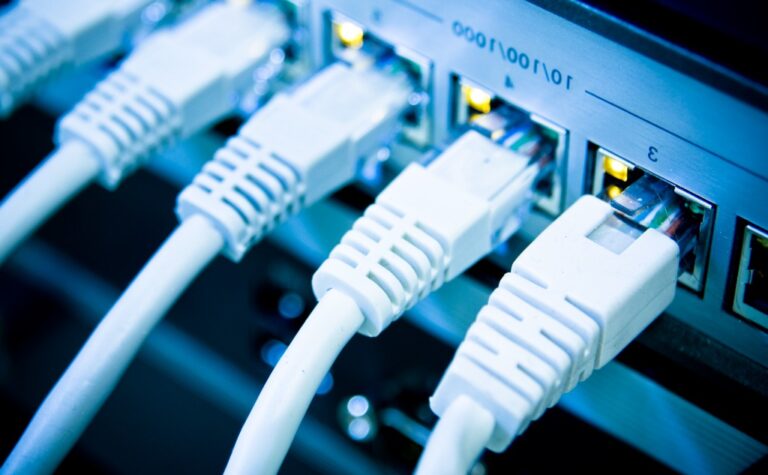 This is why your Ethernet light is blinking orange (yellow, red) or green.

So if you want to know what your Ethernet lights are trying to tell you, then you’re in the right place.

Ethernet was originally developed to provide techies with an easy way to connect all their devices to one network, specifically on a local scale.

Almost everyone now uses a router or switch at some point. Whether at home, at the coffee shop, or your workplace or university.

Although Ethernet runs at much faster speeds than Wi-Fi (40 Gbps vs. 9.6 Gbps), Wi-Fi has taken center stage since Xerox PARC developed this hardware in 1973.

Because of how many fewer techies use Ethernet versus Wi-Fi, in addition to a lack of standardization for LED lights between manufacturers, it’s tough to find answers for an Ethernet light blinking orange (yellow/red) or green.

Fortunately, this in-depth overview will let you know what is going on:

People tend to get mixed up when trying to identify the issues with this tech because there is no one standard that ethernet cable manufacturers have to adhere to.

This means that if the maker of your Ethernet LAN port wanted the lights to blink pink, then you’ll be stuck googling why is my Ethernet orange light on? until you run into someone who happens to have the same model and problem as you.

You may not want to read this, but here we go:

Thanks to the lack of manufacturing standardization, the exact meaning that the light tries to communicates to you depends on your device’s make and model.

What Does a Blinking Light Mean on Your Ethernet Port?

If you’ve got an Ethernet cable plugged in and your device is connected to another active device, then no light would be the problem. That would mean that there is no network connection.

A blinking light on your Ethernet port means something valid is going on, whatever color it is like:

You don’t want that light off if you’ve plugged a device into your Ethernet port. You need either a blinking orange light or a blinking green light. Or a steady light (more on that below).

There isn’t a standard for how the lights should behave on an Ethernet port. Or how many lights are there.

However, there are usually two lights on an Ethernet port. The two lights mostly have two different colors:

Typically, one light is a steady light, and the other is a blinking light.

Whether it’s blinking or steady makes all the difference. Because both lights can be orange or green depending on the manufacturer. But only one is steady, and only one blinks.

A steady Ethernet light usually means that the device is connected to a valid device on the other end.

A blinking Ethernet light usually means activity. Data gets sent to or from the device.

Here’s what each light can mean in detail:

What Does a Steady Green or a Steady Orange Light Mean on an Ethernet Port?

The steady green or orange light on your Ethernet port usually means that an Ethernet cable is plugged in and connected to an active device on the other end.

However, older devices just have a steady orange light to indicate link speed:

Since there are no standards, each manufacturer has its own rules. For example, IBM:

The speed is determined when you connect, and it stays fixed once connected:

What Does a Blinking Orange or a Blinking Green Light Mean on an Ethernet Port?

The blinking green or orange light on your Ethernet port usually means activity. Receiving or sending data to the device on the other end of the Ethernet cable.

Again, there is no standard for the blinking light’s color: different manufacturer, different rules.

By the way, the Ethernet service edge router is second on the router and switch market in the US:

For example, IBM and Netgear treat it like this: a blinking green light simply indicates activity.

However, the light might be orange, yellow, or red and still means that your Ethernet port is just doing what it’s supposed to do: sending and receiving data.

Ethernet Lights and Their Meanings

So your Ethernet port usually has two lights:

The light that tells your connection speed is either on or off, steady, and typically green or orange. You can have an active connection when it’s off, but probably at a low speed.

The light that shows your activity is blinking and typically green or orange. If you don’t have this blinking light, then something might be wrong.

IBM goes with two lights for their Ethernet ports:

Netgear’s Ethernet ports have two light too, but Netgear uses them differently:

On cheap Ethernet ports, there is usually one green light per port. It blinks when data is sent or received.

So there is no speed indicator light. Although, sometimes it’s just one steady light that shows the connection speed.

There are even devices that don’t have any lights on their Ethernet ports.

The ethernet port on an advanced device can have different meanings based on configuration or user action. Again there is no standard.

In general, when your Ethernet port has a light, there should be at least one blinking or one steady light when connected. If the light isn’t steady or blinking, you’re not connected or the light is broken.

If the blinking Ethernet light bothers you, stick a sticker on it or paint over it with a marker. Unfortunately, there’s no way to turn it off.