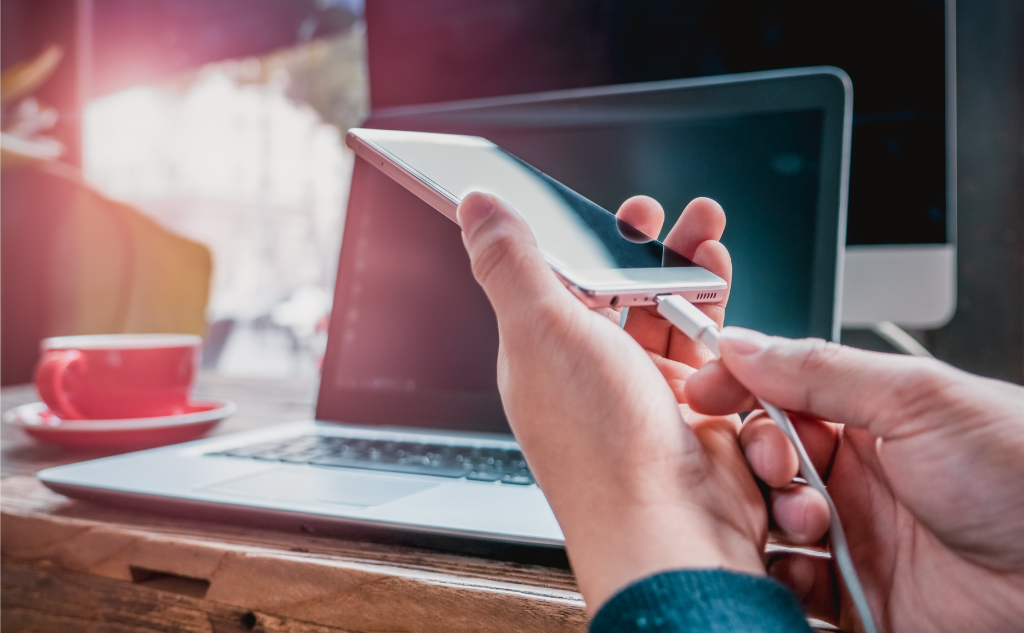 This is whether you can charge your phone with your laptop charger.

In short: when it fits, you probably can.

So if you want to know all about when you can charge your phone with your laptop charger, then you’re in the right place.

Can You Charge Your Phone With a Laptop Charger?

How long will it take to get your old portable charger back or buy a new one?

When you get home and discover your mistake, you start thinking about the options.

Maybe you should buy a solar charger with a power bank for situations like this.

Then you remember your laptop. It’s hooked up to a power supply that also recharges its battery pack.

If you have a newer model laptop, the plug looks like it will fit into your phone.

DARE YOU TRY IT?

Will your phone happily charge back up to 100%, or will it sizzle and smoke and turn into something that only serves as an expensive paperweight?

The answer is, if the plug fits, yes, you can safely charge your phone…probably.

However, before you hook it up, take a few minutes to understand why that is and when it might not work.

Can You Charge Your Phone With Your Laptop Charger if the Plug Fits?

With earlier laptops, it might not have occurred to you to try such a thing. Most laptop chargers had a round hole that fits into a round socket.

You see, the charge from an older laptop adapter would have carried too much voltage and too much amperage for the phone.

For a laptop charger to work safely with a phone, two things have to happen.

First, the plug has to fit into the socket.

Second, the charger and the phone must share a protocol. That’s a fancy way of saying they have to speak a common language.

The phone has to tell the charger how much power it wants, and the charger has to understand and make the right adjustment.

Can You Charge Your Phone With a Laptop Charger If It Is USB-C?

At one time, laptops and phones had all kinds of different chargers.

So if you lost your charger, you had to be careful to replace it with exactly the right one for your device.

For your Macbook, you needed a Macbook charger.

For your phone, it had to have the right connector for the phone’s charging slot.

This drove consumers nuts, and even the industry recognized that it was a problem.

An organization called the USB Implementor’s Forum (USB-IF) finally did something about it.

The USB-IF is a group that includes major industry players such as Microsoft, Apple, and Intel.

In 2014 USB-IF announced there would be a USB-C CONNECTOR. It would become the industry standard and allow for a universal charger.

The USB-C plug would be small enough to fit into a phone yet powerful enough to recharge a laptop battery. It took a few years to happen, but now the USB-C is standard in all sorts of devices.

If you buy any major-brand Android smartphone or laptop, you’ll get a USB-C port. Even Apple is getting on board.

What’s a USB and Why Should I Care?

USB stands for universal serial bus, and it’s been around since the mid-1990s. It provided a common plug and socket and a common protocol for computers and the devices you hook up to them.

A USB port was the commonly used hookup for external USB devices such as external hard drives and CD players.

You could also use the laptop USB port as a USB changer for devices such as an e-reader.

The process required a special charging cable (it came with the e-reader or other device) to use your laptop’s old USB port as a charging port.

There needed to be an old-style USB plug on one end and something that fit into the reader on the other.

Earlier USB plugs were large, way too large to be practical for a phone. A USB-C plug, however, is just the right size.

And here’s another plus for the USB-C. The old USB plugs went into the slot directionally. If you turned them upside-down, they wouldn’t go.

With USB-C plugs, there is no upside-down. They’re reversible, so they go it the first time no matter how you orient them.

You may think of your charger as a relatively dumb device that just plugs into an electrical outlet and cranks out power. But that’s selling it short.

A USB C charger is more than just an unaware wall charger.

It has to recognize a protocol, which is sort of like speaking a language. That protocol is USB Power Delivery or USB-PD.

If you don’t have a USB-PD compatible charger, charging your phone is not safe even if the plug and socket fit. It can’t establish a rapport with the phone and set the proper level of power output.

When both your charger and your phone are USB-PD compatible, they can talk to each other, and negotiation takes place.

The phone tells the charger how much voltage and amperage it can handle. The charger provides the level the phone requires.

A USB-C charger is a power adapter capable of pumping out different levels of power, and it chooses the one the phone requires.

A modern smartphone battery brings another level of protection to the party. It has a built-in charge controller that regulates input voltage and won’t let the phone overcharge.

Better Than Your Phone Charger?

If you have the right laptop charger, it may work with greater charging speed than the charger that came with your phone. This is because it can draw and transmit more juice than the average phone charger.

USB-PD is also the protocol that supports fast charging. Even if you eventually replace your old phone charger, you my find your battery gets back up to 100% faster with the laptop charger.

Remember when I told you that if the plug fit the socket, then charging was probably safe? Unfortunately, there are rare cases when it’s not. The good news is that you’re not likely to run into them.

Back in the early days of USB C charging, some unscrupulous manufacturers built FAKE USB-C CHARGERS. They looked like they’d work, BUT THEY DIDN’T.

Their plug fits into the socket, but they don’t speak the right language. To put it more formally, they don’t comply with the USB-PD protocol.

It’s getting harder and harder to find these pretenders. As a result, etailers such as Amazon have BANNED THEM from their sites.

If you have a brand-name laptop that came with a charger that fits your phone, you’re good to go. Charge away with confidence.

On the other hand, if you picked up a charger at a garage sale, take a good look to make sure it’s a genuine USB-C charger with USB-PD protocol.

How To Spot a Fake

If you see a picture of a charger on eBay, it’s hard to tell the good from the bad. However, if you’re actually holding the charger in question in your hands, there are several signs that distinguish the legit from the phony.

If you need to replace your USB C laptop charger or just want a more efficient charger for your smartphone, BUY A NEW CHARGER FROM A REPUTABLE VENDOR! That’s the best way to avoid being saddled with a fake.