This ASCII to hex table contains all 256 ASCII characters and their hex counterparts.

So if you want to get the complete ASCII to hex conversion table, then this article is for you. 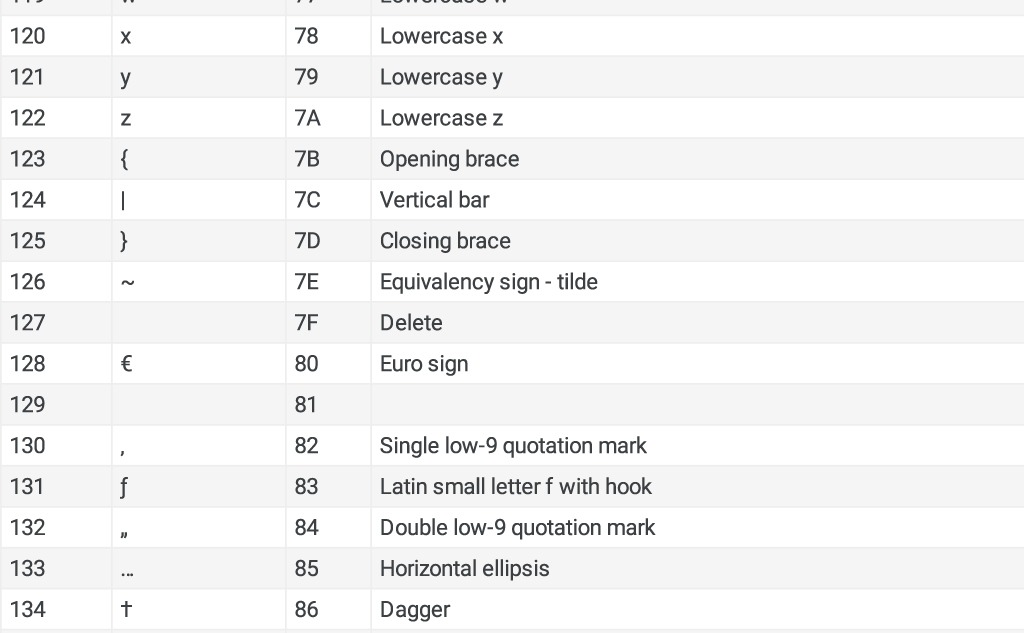 What Is Hexadecimal (hex) Numeral System in a Nutshell?

The Hexadecimal Number System is one type of Number Representation technique.

What this means is that there are only 16 possible digit values or symbols.

Only four bits are needed to represent the value for any digit.

A Hexadecimal number is indicated by adding the “h” suffix or the “0x” prefix.

How Does the Hexadecimal Numeral System Work?

Hexadecimal, also called base 16 or Hex, is used to share and write numerical values.

This means that it is not any different than the more well-known numeral systems, including decimals.

However, decimal uses a base of 10 (which is ideal for individuals with 10 fingers!) and uses 10 unique digits. These are combined to represent numbers.

Hex is like decimal because it combines digits to create bigger numbers. As mentioned above, Hex uses 16 unique digits.

There are countless other numeral systems.

For example, binary, which uses a base of two, is popular for those in engineering. That is because it is the language of computers.

The base two binary system uses just two-digit values – zero and one – which represent numbers.

Like binary and decimal, Hex is one of the most used numeral systems for the programming and electronics industries.

It is essential to know how Hex works because it makes more sense to represent a number using base 16 rather than decimal or binary.

Understanding the Basics of Hex

With Hex, you will encounter both lower case, and upper-case representations of A through F.

Both work the same.

There is not much of a standard regarding upper versus lower case.

Hexadecimal and decimal have 10 digits that are the same.

As a result, they create many similar-looking numbers.

However, 10 in Hex is a completely different number than what it is in decimal.

However, subscripts are not the only way to clearly state a number’s base; this is just the most literal method used.

How to Count with Hex?

The only difference is that there are six additional digits to handle.

Once a digit place exceeds “F,” the place is rolled to “0,” and increment to the digit to the left by one.

Usually, a hexadecimal number is suffixed or prefixed with a specific identifier. The most common include:

There are several other suffixes and prefixes that are used for programming languages.

For example, with assembly languages, you may see the suffix “H” or “h” or the prefix “$.” If you do not know what programming language to use, there are plenty of examples available.

How Is the Hexadecimal Number System Used?

The Hexadecimal Number system can be used for microprocessors and computer programming.

It can also be used for describing web pages and colors.

Each of the three main colors is represented using two hexadecimal digits for creating 255 potential values, resulting in over 16 million potential colors.

The Hexadecimal number system can also be used for describing locations in memory for each byte.

These numbers are also easier to write and read than decimal or binary numbers for computer pros.

The biggest benefit offered by Hexadecimal numbers is that it will use less memory to store more numbers.

For example, it can store 256 numbers in just two digits, but decimal numbers stores just 100 numbers in two numbers.

If you’re looking for any other ASCII conversion table than the complete ASCII to hex table, then you’ll find it here.